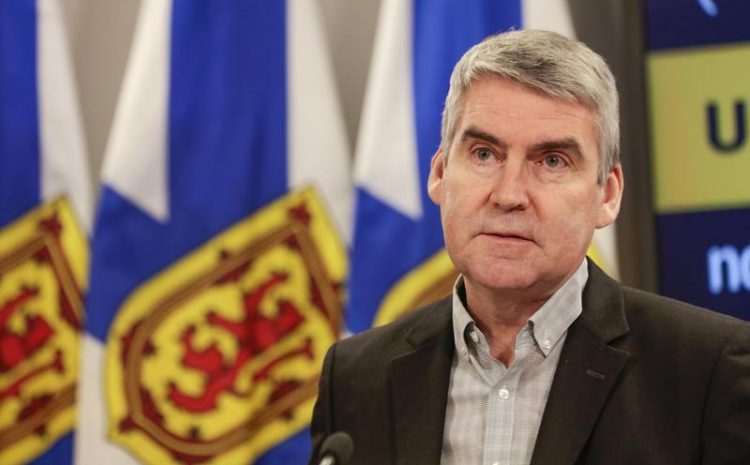 Social distancing and self-isolation are no longer suggestions for Nova Scotians.

Premier Stephen McNeil declared a provincial state of emergency Sunday, the latest move by the government to try to halt the progress of the novel coronavirus.

“Over the weekend, I saw and heard of far too many people gathering, blatantly disregarding the social and physical distance rules of staying six feet, or two metres, apart, hundreds gathering on our beaches and in our parks, large groups of people congregating, young people playing street hockey, cars parked everywhere, people disregarding law enforcement,” McNeil said during a briefing in Halifax.

“We are dealing with a deadly virus and this behaviour is unacceptable.”

The state of emergency means people cannot gather in groups of more than five.

The announcement came as the province announced seven new cases of COVID-19. They are related to travel or are close contacts of previously announced cases, said Dr. Robert Strang, the chief medical officer of health for Nova Scotia.

Nova Scotia has 28 cases of COVID-19 as of Sunday morning. The affected people live across the province and range in age from the upper teens to the 70s, said Strang.

The premier sounded frustrated about what he described as a lack of co-operation from some members of the public who haven’t taken seriously restrictions that had been put in place.

“You walk to exercise, not to socialize,” McNeil said.

“Stay in your neighbourhood; walk around the block or down the street.”

Provincial parks are closed, and trespassers will have their vehicles towed, the premier said.

Effective Monday at 6 a.m., the borders of Nova Scotia will be tightened and self-isolation for 14 days will be a requirement for anyone who has travelled outside the province. Truckers and people who work in health care, child protection and law enforcement will be exempted.

Fines for individuals found in breach of the orders are $1,000 for each offence each day, while business and corporations face $7,500 for every breach, said the minister.

“People can be fined on multiple days if they fail to comply with the law,” Furey said.

Chuck Porter, minister responsible for the Emergency Management Office, said the state of emergency does not replace the powers of the province’s chief medical officer of health.

“Instead, this order extends the province’s authority and adds to the important work that has already been done,” Porter said.

Strang said the time is right in Nova Scotia to minimize the impact and slow down the spread of COVID-19, as long as everyone follows the measures strengthened Sunday.

“If people are in self-isolation from travel or if they’re in known contact of a case, they need to stay home,” Strang said.

“If you’re able to, you can go out into your yard or your balcony, but do not go further. You need to get help to get groceries, to get the pharmaceuticals you need. This is where all the rest of us need to step up, to help those people, to help them stay in self-isolation.

“I recognize that for people in apartments, multi-unit dwellings, this is very challenging.”

To date, almost 2,100 tests have been done in Nova Scotia. Strang said tests in the province will no longer have to be sent to the National Microbiology Laboratory in Winnipeg, as the Queen Elizabeth II Health Sciences Centre microbiology lab in Halifax is now able to report both positive and negative test results for COVID-19.

Separately Sunday, the province’s largest municipality said it supports the decision to declare a state of emergency. To that end, all parks, beaches, playgrounds, sports fields/courts, and trails in the Halifax region are closed until further notice.

“Services deemed essential under the provincial order will continue to operate,” according to a Halifax Regional Municipality news release.

“Municipal staff are currently determining service level adjustments related to a provincial state of emergency, including Halifax Transit, and will issue announcements as decisions are confirmed.”

All standard essential services of the municipality – including 311, fire and police – are operational during the state of emergency.

Shopping malls remain open but everyone must adhere to the five-person rule. McNeil said NSLC outlets are still doing business, albeit with limited hours and access restrictions.

“There are, quite frankly, those Nova Scotians whose health requirements need access to this product, and we also know there are family situations where people are living in very difficult circumstances, whether it’s domestic violence or abuse, that the restriction of this product could escalate that,” the premier said.

On Saturday, another service was shut down indefinitely. Dentist offices were ordered to close “unless they deem it necessary to perform an emergency dental procedure in the best interest of the patient’s health.”

The province’s dental regulatory body had earlier urged dentists to cancel non-urgent appointments during the outbreak.

“I want to thank all Nova Scotians who have been following the public health protocol,” McNeil said Sunday.

“But I cannot allow a small group to put their own self interest ahead of the collective health of all Nova Scotians. As the premier of this province and as the chief medical officer of health, it is our jobs to create the conditions to keep you safe. It is your job to follow them.

“If you cannot follow the laws that we have put in place today, there will be consequences.”